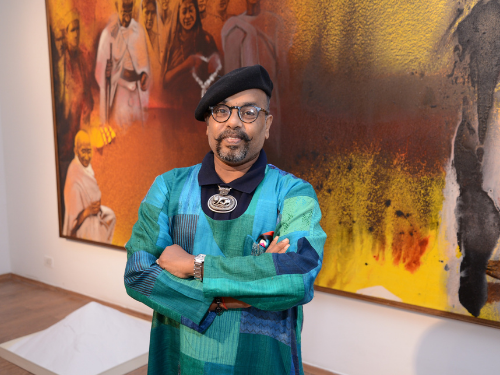 Paresh Maity has a degree in Fine Arts from the Government College of Art & Craft, Kolkata and a Masters in Fine Arts from the Delhi College of Arts. Born in1965, Tamluk is a small town in West Bengal, renowned for its heritage of terracotta art. The association with art for him began very early in life, in school he made clay images of gods and goddesses, sold them to support his education. He began with water colours, painting rivers and landscapes and later moved to working with oils, as one observes his colour palette - the use of blue and yellow have prominently been used right from his early works.

Presently into making documentary films, the artist is well updated with the use of technology in the film “The Mystic Melody.” Once when in a conversation with him one discovers that Rajasthan on the whole plays a vital role in works of this prolific artist and somewhere he draws a contrast between Bengal and Rajasthan through his choice of colours. Both the states have been iconic to his life – basically from where he started and later where he drew his inspiration from. Even after decades Paresh still goes and spends months together in Rajasthan. The sharp nose in his figurative, the arresting of the blues and the yellows, other bright colours, the several objects and cityscapes defines his love for the land. While we spoke of the mountains that have become part of his recent works, he didn’t wait to mention about his frequent visits to Shimla too. The love for the mountains has also found space on his canvases.

Tracking the artist’s journey that began as a sculptor, then a painter and now making installations and films. The versatility in his creativity seems to be growing at a fast pace and getting him National and International acclamations and awards. The Artist works and lives with his wife Jayasri Burman in New Delhi.