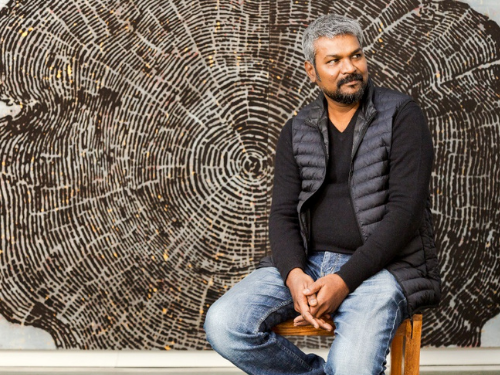 G.R. Iranna was born in 1970 in the Sindgi district of Bijpaur, Karnataka. He acquired his Bachelor of Fine Arts Degree from the College of Visual Art, in Gulbarga in 1992. Two years later, he got his Master`s degree in painting from the College of Art, New Delhi. Between 1999 and 2000 he acted as artist-in-residence at Wimbledon School of Art, London.

Many of Iranna`s paintings portray pain as an abstract force that is interpreted visually in bruised textures and razor sharp cutting edges. His painting has always been far impassive from an overriding, postmodern logic. Instead, Iranna uses the idealistic, representative and modernist language and vocabulary of Indian contemporary art. His most recent works are all visions of confrontation. A discerning eye senses the massive vibrant energy that encompasses the surfaces. This becomes very evident in the colours he uses, His works have been exhibited at several galleries in Delhi, India and abroad. Recipient of several National and International Awards and his works find home in several private Collections globally too.