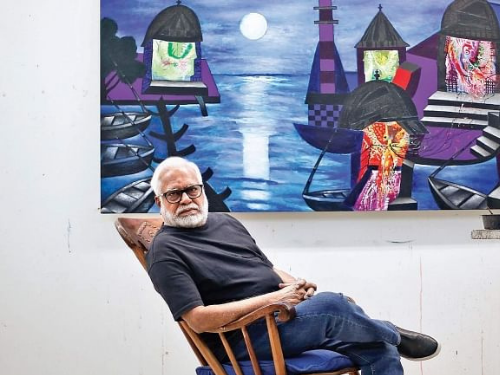 A widely celebrated artist, best known for his series depicting the soul of the city of Varanasi with the Ganges representing its quintessential circle of life and death and the countless contradictions in which the holy city is steeped in, pulled powerfully in opposite directions. Manu Parekh’s landscapes are known for his spontaneous use of colour, bold brushstrokes and bold, prominent lines. Experimenting with colourful abstraction, figurative and sexual imagery. One also sees the amalgamation of both nature and day to day materialistic reality along with social issues addressed in his works. Born in the year 1939 the artist have varied interests, be began as stage designer, actor and an artist, he eliminates the boundary lines between different genres of art.

He travelled to the several remote parts of India having being associated with the Handloom Board as a consultant designer, working with tribal artisans and craftsmen and helping them sustain their livelihood with their original art and craft forms. Manu Parekh’s works are part of many important public and private collections - National Gallery of Modern Art, Birla Academy of Art and Culture, Lalit Kala Akademi, and others. He works and live with his wife Madhvi Parekh in Delhi.